It was a netball match taking place at Accington Academy. The game was high fives so we all tried the different positions. These were, centre, goal keeper, goal shooter, goal attack, goal defence, centre point marker, time keeper and scorer.

There where Clodagh, Ella, Mia, Amelia, Elizabeth, Ruby, Layla and Darcy. Miss Dakin and Mrs Lambert came with us.

What were the scores?

On our first game, we won 2-0 against Benjamin Hargreaves B, then unfortunately we lost to Mount Pleasant 7-0. We won our next two games.1

Girls of the game?

The girls of the game were- Clodagh, Ruby, Darcy and Layla.

We had a very successful match and all of our players used the skills that we have been using in netball practice. 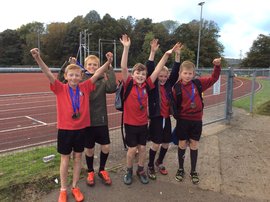