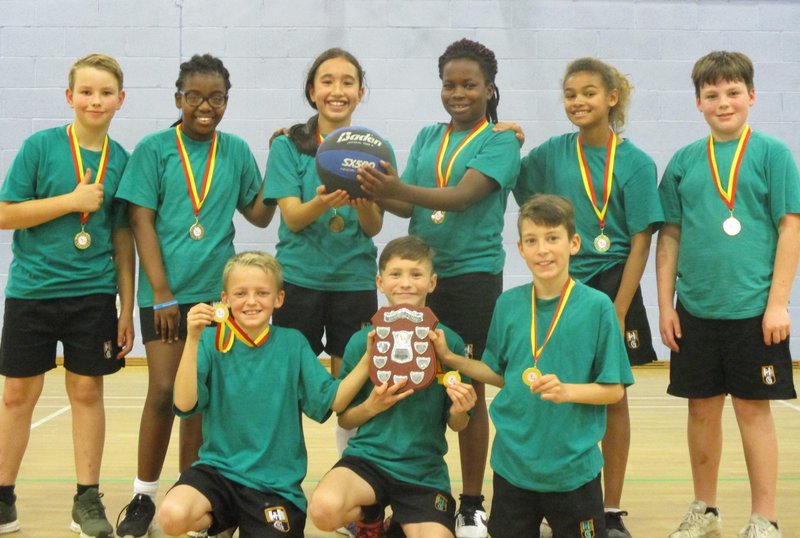 Congratulations     to the Team Garlinge Basketball team who were unbeaten at this year’s     Thanet Finals. They went into the competition with an amazing attitude     ,taking each game as it came.

With     the top 8 teams in Thanet competing, it was going to be a close competition     but, with the values at the heart of every game, we played some fantastic     basketball. From coming from 1-0 down to draw with Upton, to beating St     Josephs who had beaten us in the previous competition, it was a stunning     all round performance.

Team   Garlinge will now go on to represent all Thanet Schools at this year’s Kent     School Games finals.

Well  done to everyone who took part and for showing real team spirit and great     aspiration.

The Y5     dance crew were representing the school at the Thanet Dance competition and     they absolutely smashed it! All their hard work paid off as they wowed the     audience with their robot inspired street dance and earned themselves a     fantastic 2nd place .

The     netball team had a chance to compete this term in the Passport Cup. The     played exceptionally well in the pouring rain and were rewarded with a     bronze medal. Well done.

This     term our year 3/4 boys took part in a series of friendly football     matches at Margate FC. The boys played four matches, winning each of the     games convincingly and also demonstrating the school values and good sportsmanship.   Leon  took home the ‘Star Player’ award for his hardworking attitude     and superb performances.

A     number of boys from years 5/6 continued to represent the school admirably     in the Les Riggs Cup, consistently demonstrating great teamwork and     togetherness. They     navigated their way to the Quarter-Finals,     beating Drapers Mills and Bromstone before losing narrowly 2:1 to Upton in     what was a fantastic and hugely competitive performance.

A huge congratulations to all the children     that gave up their Saturday morning to represent Team Garlinge at this year’s     Sports hall Athletics competition. Well done to the 3/4 team who finished 5th     overall with the girls’ team finishing a grand 4th place. The     5/6 team performed equally as well but, thanks to an exceptional 3rd     place in the girls event, the team achieved an overall 4th place.

On Saturday 24th November,     twelve lucky children from years 4, 5 and 6 were mascots for the Margate FC     vs Bishop’s Stortford match.

The experience provided the children with the     opportunity to: play on the 4G pitches before the game; welcome both teams     onto the pitch at the start of the match; play the role of ball boys and     girls during the game itself and step onto the pitch at half-time for a     penalty shoot-out. The children had a fabulous time and thoroughly     enjoyed the experience - despite seeing the home team lose the match 4:1!

We recently took part in the first ever     Thanet Year 2 Dodgeball festival. We all had fun learning the new rules of     this game and seeing how many children we could get out! Everyone had a     fantastic time and showed all of our school values. Well done!

At the     start of term several Year 2 children represented Team Garlinge at the     football festival held at Margate football club. Amelia got an extra medal     for Star player of the match! Well done to all the children who took part.

On     Tuesday evening’s we have an Inclusive Sports Club where we play a variety     of sports and learn new skills. During the school year we take part in     competitions and festivals competing with other schools. It is a small,     friendly club that is suitable for children who may find the other clubs a     little daunting. Look out for more information coming next term!

This     term, a group of children have started the skills force programme. In this     programme, children learn about the 21 qualities of behaviour and complete     a range of fun activities. One activity this term was poppy making for     Remembrance Day.

Children     are also encouraged to talk about how they are feeling, to look for ways to     help them explain their feelings and to learn more about their emotions. We     will feature more about this as the course continues

Next term will see the return of our house     competitions for the year 4 children!

Look out for more details coming soon from     the SSOC team.

We     welcomed ex professional footballer Bob Bolder to our school this term. He     has putting our Y6 pupils through their paces in all weathers! They have     been practicing the skills and drills needed to improve their match     performance and have enjoyed getting muddy in the process!

A group     of Y3 pupils have had an exciting opportunity to learn the skills of rugby     with the PE teachers from Chatham& Clarendon Grammar school. They have     challenged themselves to learn a new game and shown exceptional skills too!     Very impressive!

Our school is situated in the seaside town of Margate. We have a passion for sport and love to compete. Follow us on twitter @TeamGarlinge