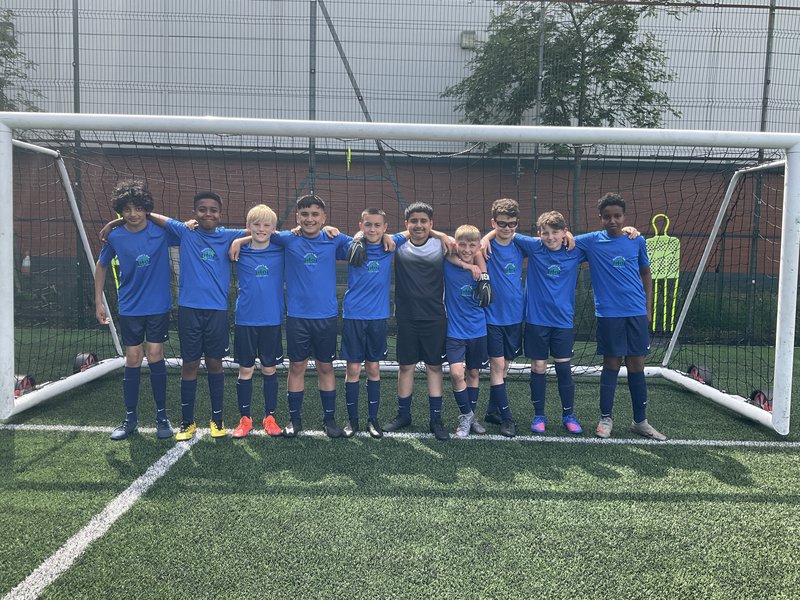 After qualifying by winning our league on Monday 14th March a select Y6 team travelled to SUFC academy to play in the Year 6 League finals on Thursday 16th June.

Once we arrived,we went straight to the pitches to do a warmup. We could see on the side that

loads of parents had turned up. We began by doing some passing and moving whilst our

goalkeeper got warmed up. Then we did stretches to prevent injuries.

For the first match, we were off. Whilst we were off, the match on our pitch kicked off. After the

final whistle went, they was a little 5 minute break and then we were ready. For our first match of

the tournament, we faced Intake. Once the game had started, we got off to good start and

because of that we got a penalty and we scored. Shortly after scoring, we conceded! We

conceded because there was a ball across goal and it was an easy finish for their striker. It took

us until the second half to regain our lead. There was some good passing play and then Eli

crossed the ball in and Zayan volleyed it into the back of the net. Deep into the second half, we

won a free kick near the halfway line and Zayan took it quickly. We chipped it over the defense

and Jet provided the finish and surely-the win was guaranteed. Then the final whistle went and it

was a great start to the tournament.

After that, we had to turn our attention to our next game against Arbourthone. To qualify to the

first group, we had to draw or win. When we kicked off got off to the perfect start, when Zayan ran

through a couple of defenders and scored. Then things took a turn for the worst, when they

leveled the match with a shot from a tight angle. Then in the second half, with 5 mins left they ran

through our defenders and scored. We pushed and tried our hardest but we just could not

score. We lost narrowly and we did not make it into the top group.

Even though we were angry about missing out on the first group; we had to take our anger out

on the next team we played against. Again we got of a quick start and scored an opener but

minutes later, they equalised. Then, we made some substitutions and we really took control with

Jet scoring 4 goals and Thomas scoring to finish of the match. The game ended 6-1 to Hunters

We moved on to our most difficult match of the group against Ecclesall. We needed to win to be

at the top of the group. We started off badly, when they scored to take the lead, but soon after

Tom scored an amazing volley to level the game. But again in the second half Ecclesall scored.

We failed to clear the ball and they scored. For the second time in the match, we equalized, but

this time it was Jet who scored, and for the third time in this match we conceded. We pushed for

the equalizer but we just could not get it. It was a disappointing end for us and the winners of the

Mr Adebola-" A great day of football (last Thursday) in the SFSS League Finals at Sheffield United Academy. One win and a loss in the group stages put us into group B. We ended up runners up in this group placing us as the 5th best team in Sheffield...on paper...A bit more luck (or better finishing!) & it could have been a more successful day I'm really proud of what the boys have accomplished on this day and for all the pupils who have represented HBJ in the past 4 years."