Parish sweep the board at the South Yorkshire Chess Championships 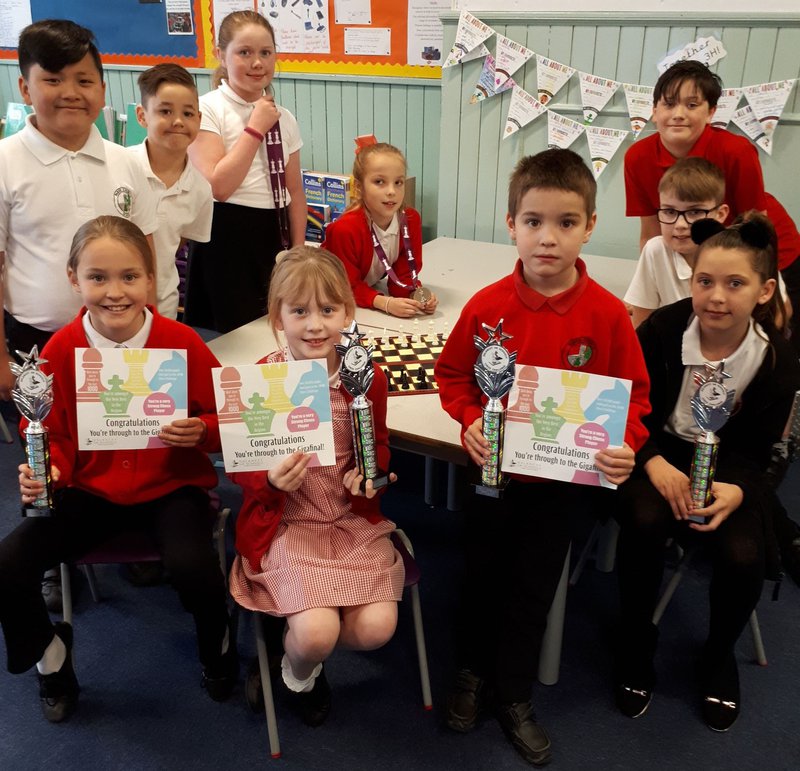 Add in running to the board and surley chess is a sport in the making!

In their annual chess championships Parish Church Primary School children have been playing one lunch time a week for the past seven weeks, with some talented players on show. Winning three points for a win, two for a draw and one for losing, the children have won badges, gold spots, mascots and various chess themed prizes. Each week the children play an opponent on the same score as them, so that the children continue to be equally matched as the tournament progresses.

With teacher Mr Anderson and Governor Mr Fisher making sure all the rules are adhered to, the competition recently reached its finale. Although in the competition children could play children of any age and gender, for the final results they were compared with children of the same age and gender. That gave the school eight section winners including an overall champion; Naomi Kwant. Naomi was unbeaten for the whole tournament, winning all of her 7 games, including one against her younger brother.

This then meant that a merry band of eight children and their families travelled to Sheffield to take part in the South Yorkshire Chess Championships, part of the British National Delancey Chess competition.

The children were now taking on the best chess players in the area. With the standard being so high and just to get a point in any of their six games was an achievement.

Finally after a long and mentally tiring day the children were invited back into the playing hall for the results. Parish were delighted with not only the performances of all the children, but their wonderful attitude and behaviour as well. All their children received a special certificate and some had gained enough points to be awarded with medal. Lucy Hunt secured 2nd place and a silver medal in the U11 section, Daisy Aird matched this in the U10 section, with Jake Warner doing the same in the U11 section.

The four champions will now travel to Birmingham in July to take part in the Midlands Gigafinals, which will be an amazing experience, the final step before the British Finals.

Parish pupil Levi Coombe said ‘I have only started playing chess at school this year but Mr Fisher and Mr Anderson have really helped me and I am really enjoying it. I never dreamt that I would win a competition like this. It was great to have my cousin Lucy there as well as she is such a great player. I am very nervous about going to Birmingham but I will do my best.’

Mr Anderson, teacher and chess club organiser, believes chess to be a very important game for children to learn. “It really gets them to think critically in different ways and some countries believe it is so important they make it compulsory for children at school.  We weren’t able to make the Lincolnshire Finals date so we had to look further afield and it all worked out for the best. To have so many children getting to Birmingham is a real achievement, which we are all immensely proud of! We must say a big thank you to all the children and the parents involved as they are not allowed to watch the games due to the chess fair play rules, so have to sit in another room all day. We all wish all of the children the very best of luck at the Midlands Gigafinal, it is 20 years since a pupil from a Gainsborough school made it to the National Finals so it’s about time that we had a modern qualifier!”