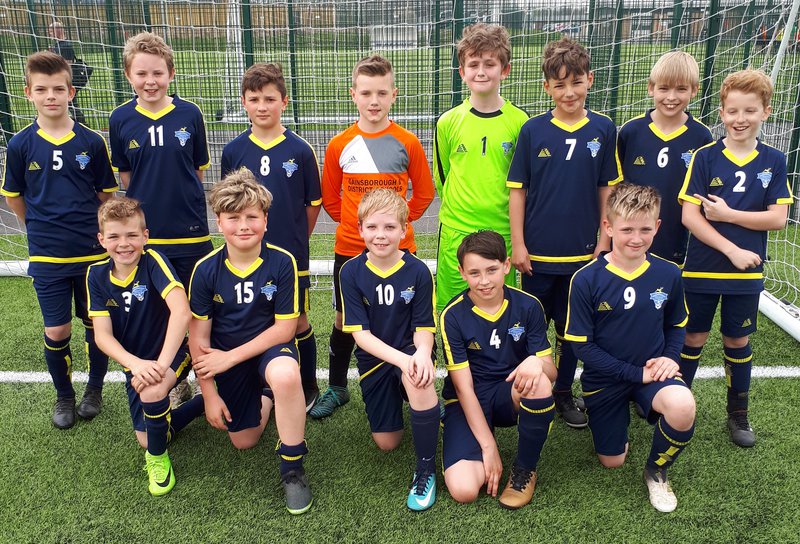 With three players in the squad Parish were the back bone of the Gainsborough team!

Following a number of trials Gainsborough and District Primary Schools final chose a Boys and team and a Girls team to represent them at the English Schools’ Football Association U11 9 a side Midlands tournament. Before the tournament the two teams were lucky enough to play friendly matches against Marshalls U12s in preparation and it was great to see children from different schools playing together as a Gainsborough representative team.

Both teams travelled to Sheffield and the fantastic facilities at St. George’s Park Graves with their 3G pitches. The Girls team played first and although they played some very neat football they found the high temperatures and large pitches difficult to cope with against larger and taller players. Having lost their first four games by the odd goal the team finally got everything to click into place and they scored their first goal and gained an excellent draw. In their final game they gained another point and their first clean sheet. The girls could be extremely proud of their performances against much larger areas such as South Derbyshire and Chesterfield to become the 4th best team in the Midlands area.

After the girls it was time for the Gainsborough Boys to play their matches. With 8 teams there were two leagues of four and Gainsborough kicked off group A. Playing South Derbyshire the Gainsborough team were absolutely unstoppable. Running with the ball and passing superbly they won the game 3-0. Onto the 2nd game and Chesterfield were a much stronger team and the game finished 0-0 with Gainsborough unlucky to not gain the points. In their final group game they had to play the red-hot favourites Sheffield. Gainsborough held their own and came close to scoring but Sheffield held firm and hit back on the break twice to win the game 2-0. The tables were drawn up and Gainsborough had missed out on the semi-finals by one point. In the 5th/6th play-off they played out a 0-0 draw before winning the penalty shoot-out to become the 5th best team in the Midlands area. In the final were the two teams from Gainsborough’s group showing that with just one more goal it could have all been so different!

Gainsborough Girls player Sky Woodhead enjoyed the experience. ‘It was a great day, we got better and better each game and we all cheered really loudly when we scored. I love playing football so to play with the best players in Gainsborough was an awesome experience.

Gainsborough Boys player Jaxon Stevens was delighted to have been picked for the team. ‘The trials were very hard as all the best players from the different schools were there and I was jumping for joy when I was picked. The competition was hard but we played well and were unlucky not to get to the semi-finals. We had a brand new kit to wear as well so that made it even more special.’

Manager and coach of both the teams, Parish teacher John Anderson, was delighted that the Gainsborough District was represented in both competitions. ‘With the help of Girls coach Hannah Lane and Scotter coach Lee Thompson we had two very strong teams and the standard at the trials was very high. It was great to schools such as Saxilby, Scotter, Morton, Blyton cum Laughton, Corringham, Benjamin Adlard, Sturton and Parish being successful in having some of their children chosen for the team. A successful funding bid to the ESFA meant we could attend this event and we looked great in our new Boys kit. The competition was a great experience and everybody in the district should be very proud of all the players and how well they did. It was also great to have local footballing legend Steve Housham watching us as his son Billy was in the team.  We look forward to picking a new team next year and wish the players from this team the best of luck as they go to Secondary school in September