On Friday 25th September, as part of European School Sports Day, We took part in an array of activities throughout the day to try and hit a target of 120 minutes of physical activity in one day! 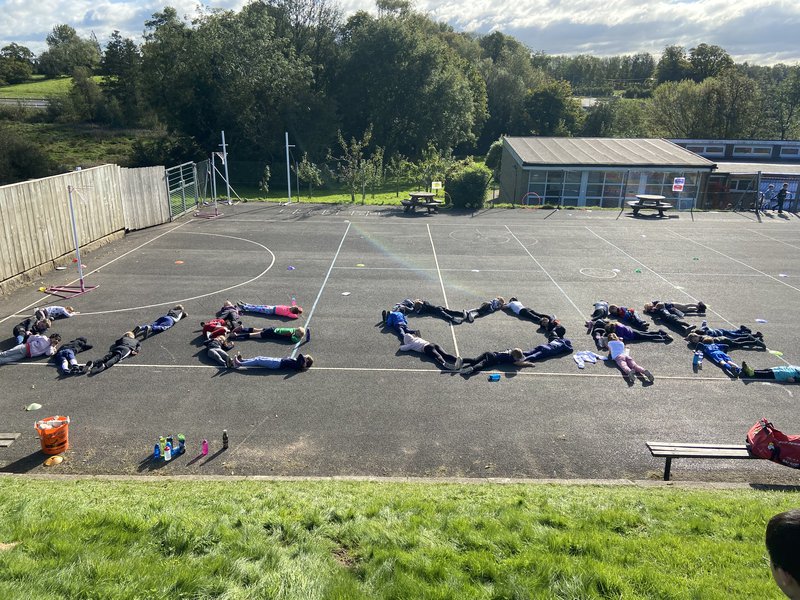 The weather was absolutely outstanding - so we decided to take advantage and most classes spent most of the day outside! Read on about what we did throughout the day, or click here to see the iMovie of all classes!

Nursery explored many different ways of moving and travelling. They were able to complete an obstacle course that included balancing on one leg, a 2 foot to 2 foot jump and a choice of a way to travel, such as hopping, skipping, running or walking. They absolutely loved it , showing no fear when jumping off a bench for the first time, which is a big deal when you are only 3 or 4 years old! An amazing effort from the nursery staff and the children had smiles on their faces from start to finish.

Building on Nursery's obstacle course, Ash and Beech class completed an outdoor agility course that tested out five fundamental movement skills of running, hopping, , jumping, throwing and balancing. The children had to complete the course with accuracy and had lots of fun setting it up. Although a little wet on the grass, it did not deter Reception and they had so much fun completing their Sports Day assault course!

Elm class took part in lots and lots of Athletic games. The first game they played was 'Touch the Base'. Children needed to touch the closest base when the whistle was blown. Then, Mr. B shouted a number and whoever was stood on that number, picked a fundamental movement skills, and everyone had to perform that skill times the amount on the spot!

They then moved on to overarm throwing, and played 'Clean Your Bedroom'. Two teams were set up with a wall between them and they had 45 seconds to pick any equipment up and throw it overarm for distance over the wall into the other team's bedroom - all very exciting stuff!

Oak class decided to spend their P.E. time on the top field, where they explored their ability to jump as far as they could in the long jump style. Mrs. Dickinson and Miss Duckworth captured some fantastic shots of them performing brilliantly and I was super impressed with the application of their skills. They then moved on to underarm throwing for accuracy with their partners! 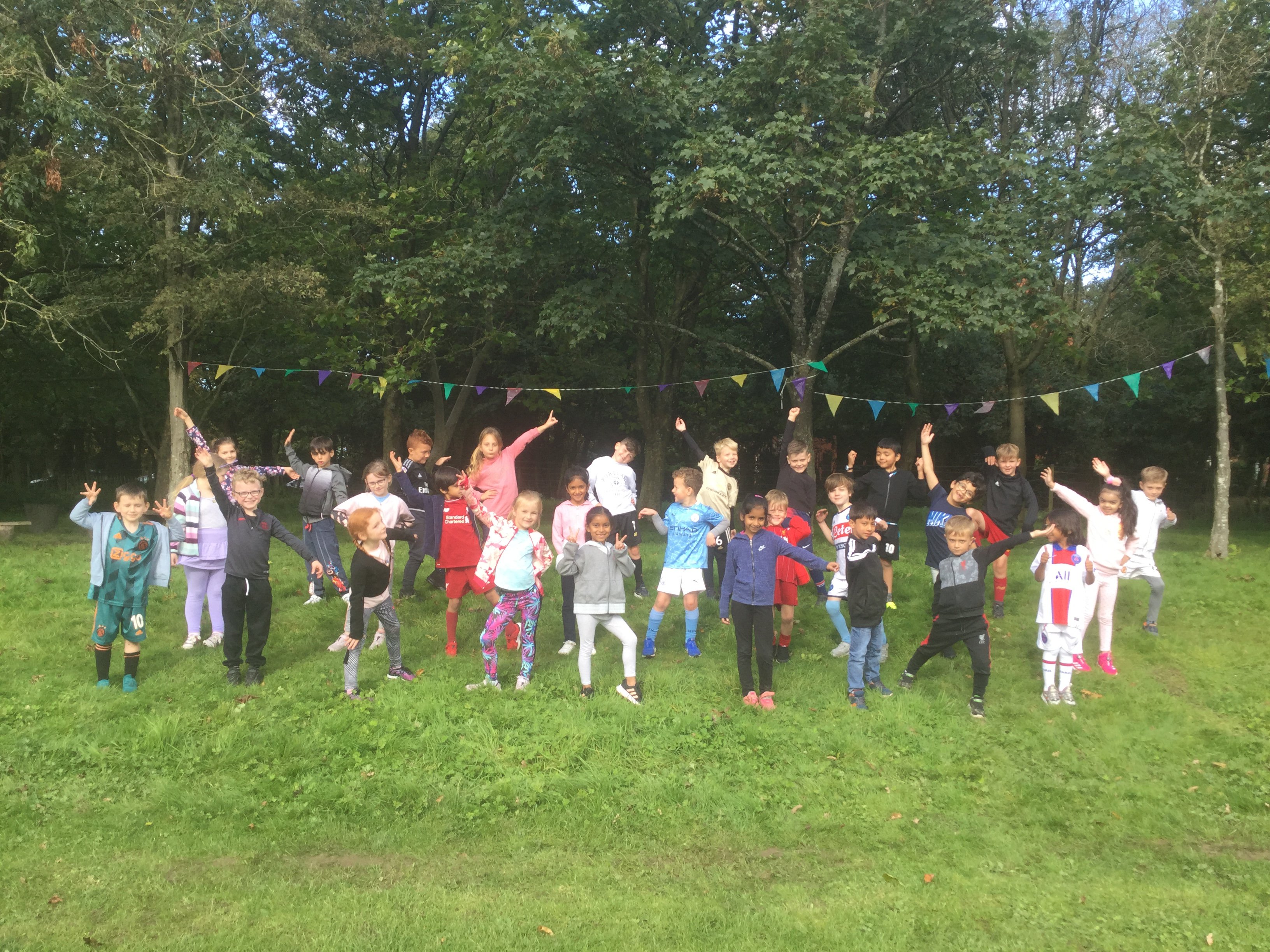 Year 3 took it to a whole new level of fun and concentrated ton their Tri-Golf skills. The children showed excellent cooperation and teamwork, working together to knock down the pins with their accurate golf shots.

A huge thank you to Miss Heath and Year 3, as they love PE and Sport that much, they decided to show us by spelling it out using their bodies! 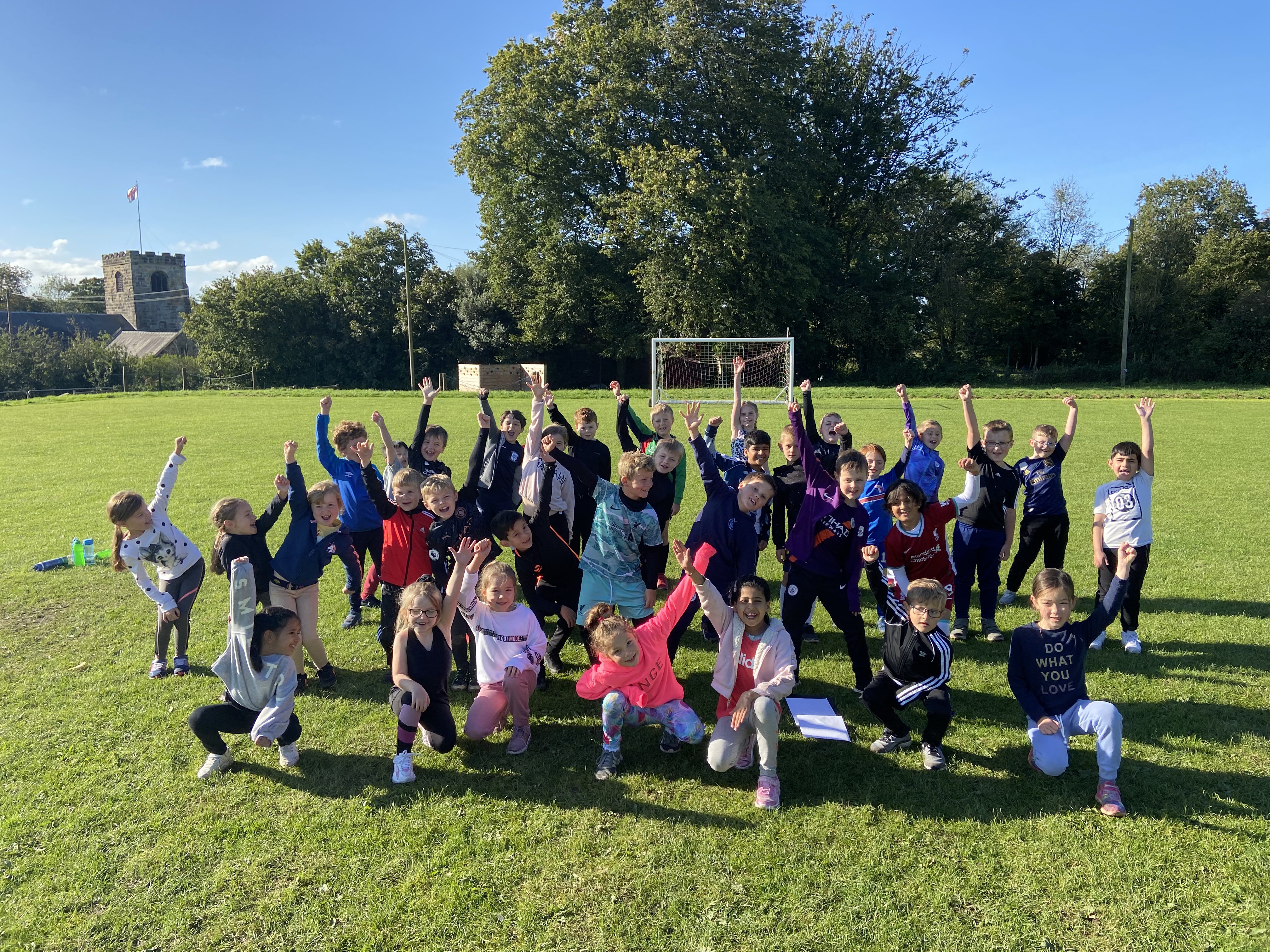 Year 4 also showed amazing teamwork, only this time they were not looking at golf, but looking at invasion game skills through netball and basketball. The children worked together in a series of mini competitions and Miss. Whitcombe decided on the winners by who finished first, but who also worked together the best - an amazing trait to have when participating in team sports!

Ms. Lowe decide to use the 'Zen' approach with Year 5, as they participated in a classroom session of Yoga and Meditation in the morning. However, it couldn't be further from calm and relaxing in the afternoon, when they all had a netball tournament, applying their invasive skills within their team to win the tournament! Ms. Lowe was having that much fun herself, that she failed to notice her camera had no battery and she didn't catch any evidence of their amazing skills!

It was competition galore in Year 6 throughout the day. In the morning, Mrs. Watson concentrated on their overarm and underarm throwing with accuracy to partners and in competition with others. In the afternoon, I decided to look at athletics and concentrated on relay races, with a variety of different activities to complete. Again, points were awarded for team work and cooperation. A special moment from Year 6happened when one child, who was last, was clapped in right until the end; the other children showed their appreciation for the effort and it showed their maturity and understanding of how important hard work is.

Overall, the day was an absolute triumph. Not only did we have an amazing time partaking in a variety of sports, but we also raised the profile of P.E. in school and raised over £400 for equipment and resources for the school. A monumental thank you goes out to all staff and parents for making this happen - even in these uncertain times, days such as this one are able to put smiles on everyone's face and we are able to remember that, not matter what, we can still have FUN!

Many thanks and stay safe.

Here at Broughton, Physical Education, Physical Activity and Competitive sport are integral parts of a child’s education. We strive to support excellence in PE through promoting healthy and active lifestyles, engaging in competitive activities and developing a love for physical education. We deliver high quality teaching, with specialist teachers and external bodies to ensure that all aspects of the PE curriculum are being delivered to the highest quality. We offer a balanced program, one that focuses on the development of the fundamental movement skills that children need in life. Children are able to access a variety of sports within school, thus providing them with an opportunity to express themselves and develop their own unique skills in their chosen sport. Individuality is something that we celebrate here at Broughton, as every child is different, and children are offered the chance to display their talents through sport. Children can also build self-esteem, develop team work and friendships and have a positive attitude towards PE, also providing the opportunity to lead a healthy lifestyle. Healthy children will develop into healthy adults, so we certainly are shaping the future and it is paramount that children see an active healthy lifestyle of importance in their adolescence and beyond. PE and School Sport is also the perfect vehicle for the children to develop the element of responsibility. We give the children autonomy to look after their PE kit, as well as being responsible for their own kit when representing the school in any sporting events. Independence is an integral part of a child’s development, and PE and School Sport offers a tool for the children to grow and mature into independent learners. A positive experience of sport outside of school is also something that we hold in high regard at Broughton. Children have access to a range of competitions and are able to compete against each other as well as other schools. This inevitably gives children the opportunity to make new friends, meet new people and create new links across the county and beyond. It gives external companies a chance to promote their teams/groups to our children, giving them a platform to continue sport outside of school. In terms of elite sport, attending sporting competitions also provides an opportunity for children to excel in sport and go on to represent elite teams, their town team and even the county. However, at Broughton, elite and competitive sport is not the forefront of our sporting ethos – it is simply to promote love and participation in sport. Because of this, we will strive to take as many teams as possible to each competition, striving to provide each child with an opportunity to partake in competitive sport. Our inclusion and participation in School Sport and competitive events has been recognised by the School Games, and we now hold the ‘School Games Gold Award for School Sport’ – a positive notion and one we plan on excelling further with our bid to achieve platinum status. In order to continue to participate in a wide range of sports, we continue to use the Sports Premium Expenditure to offer the children high quality resources. The money given from the government is distributed based on the needs of the school and, along with an audit of PE equipment and resources across school, we analyse the resources we need to make our school sport and PE lessons even more inclusive and attractive to each individual. Not only do the staff encourage the children to develop a love for sport, but the children have also recognised the importance of physical activity within their lives and relay this ethos to their peers on a daily basis. Children have recognised the passion shown by the staff and have continued this by offering their own clubs to the younger children, providing even further opportunities for the younger children to develop their fundamental movement skills, whilst also providing older children with another example of responsibility and individuality.