Plenty of fun was had as the inflatable pitch toured some of the North Dorset Schools and introduced students to the concept of 'disco football'. 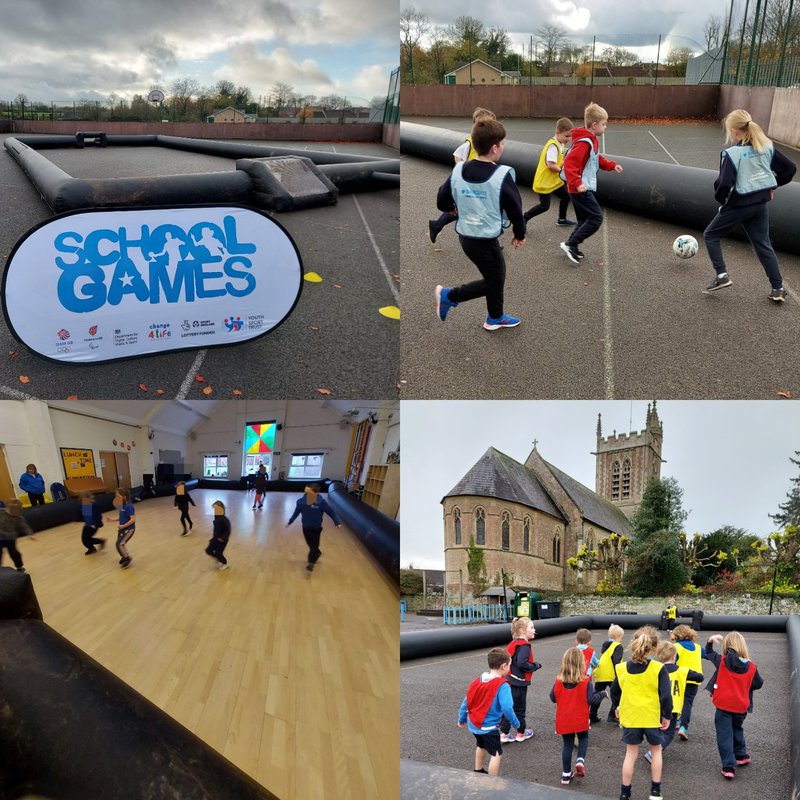 An inflatable pitch, a 'very loud' speaker and plenty of 'bangin' tunes.  It has North Dorset School Games event written all over it.

The concept was very simple; small sided games within the pitch area, keep the games nice and short so teams are constantly revolving and the children get plenty of goes, increase team work and reframe competition by counting certain goals as double and make sure everybody had plenty of fun.

The pitch toured North Dorset Schools during November and whilst we were blessed with good weather for the majority, the rain did take its toll for a couple of dates which unfortunately resulted in cancellations.  Before their visit, schools were asked to divide their participating bubbles into small mixed teams, taking into account their more able, better players and distributing them as evenly as possible. Games were intentionally kept very short to allow fixture lists to be put together which ensured that teams would face all other teams within in their bubble, allowing the students plenty of games during each session.

A few unique rules were then put in pace to encourage inclusion and to level the playing field; Goalkeepers were not permitted. A handball anywhere on the pitch resulted in a penalty and, my favourite rule, all girl's goals were to count as double.  During each games at least 60 seconds of music would be played at some point.  During this musical intrusion,all goals were to count as double again,meaning a goal from a boy counted as 2, but a gola from a girl were now to count as 4!  This rule, meant it did't take long for the shrewder operators amongst the boys to realise that one goal from a female teammate whilst the music was playing would be a very hard score to overturn for the opposition, this led to plenty of inclusive, team orientated and constantly frantic football.

Furthermore, scores and league tables were not announced to the children during the event, further reinforcing the intention that these events were aimed and encouraging enjoyment and not about first or last place.  This aspect worked to such a degree that at one school the bubble involved at the end of the day announced that they didn't want to go home, but instead wanted to stay at school and continue playing.

Although a visit from the pitch was only offered during the month of November, talks are underway investigating the possibility of a return at some point later in the academic year, when a brand new playlist will be put needed for a whole new bout of disco football.